Diferenças entre a gripe "comum" e a Influenza A (H1N1) 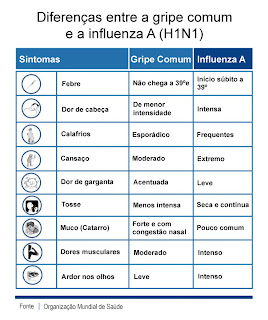 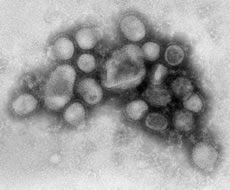 July 24, 2009 — Children with flulike symptoms and unexplained seizures or mental changes should be tested for H1N1 influenza, says a Centers for Disease Control and Prevention (CDC) report, published in the July 24 issue of the Morbidity and Mortality Weekly Report . It suggests that patients may benefit from prompt treatment with antivirals.
Concern was first sparked in May, when the Dallas County Department of Health and Human Services reported 4 children with neurologic complications associated with H1N1 flu.
Patients were aged 7 to 17 years and were admitted with flulike symptoms and seizures or altered mental status. In all 4 patients, clinicians detected H1N1 viral RNA in nasopharyngeal specimens, but not in cerebrospinal fluid. Three patients had abnormal electroencephalograms.
All patients received the antiviral oseltamivir and 3 received rimantadine. The patients fully recovered and had no neurologic sequelae at discharge.
Patients Fully Recovered
According to the CDC, just like with the seasonal flu, neurologic complications can occur after respiratory-tract infection with H1N1. Considering that clusters of influenza-associated encephalopathy in children have been reported during previous community outbreaks of seasonal flu and that children appear to be infected with H1N1 more frequently than adults, officials anticipate that additional neurologic complications are likely to be reported as the pandemic continues.
The CDC recommends that healthcare providers also consider a diagnosis of Reye's syndrome in patients with viral illness and altered mental status. Clinicians should not administer salicylates or salicylate-containing products to children with influenza or other viral infections because this may also increase the risk for Reye's syndrome.
The CDC recommends that all children at least 6 months of age receive annual seasonal influenza vaccinations to prevent illness and complications from infection. No vaccination against H1N1 influenza is currently available.
MMWR Morb Mortal Wkly Rep. 2009;58;773-778.

Authors and Disclosures
Journalist
Allison Gandey
Allison Gandey is a journalist for Medscape. She is the former science affairs analyst for the Canadian Medical Association Journal. Allison, who has a master of journalism specializing in science from Carleton University, has edited a variety of medical association publications and has worked in radio and television. She can be contacted at agandey@webmd.net.
Postado por Waldemar Hillal Barboza às 16:54 Nenhum comentário: